If only Daddy would have known about the power of #Pepsi. pic.twitter.com/FA6JPrY72V

If only Dr. Martin Luther King, Jr. had a Pepsi handy all those times he was confronted by police . . . sounds crazy right? Well, that’s because it is. However, Pepsi and Kendall Jenner may not share this same sentiment given the recent Pepsi commercial featuring Kendall Jenner, where she ends a protest by simply handing a police officer a can of Pepsi Cola, Pepsi Max to be exact. Also, featured in this commercial is what appears to be a woman of the Muslim faith capturing the monumental moment on her camera. What was supposed to be a commercial that “project[s] a global message of unity, peace and understanding”, as Pepsi so eloquently put it, turned out only to be yet another reminder of how far we have to go, rather than a testament as to how far we as a people have come.

For those who have yet to hear the details, Pepsi recently decided they needed to take their stance in the obvious divide our nation is experiencing. From governing what bathrooms we should use (Yes, I too, thought all bathroom issues had been resolved in 1964), to governing our nation, America can’t quite seem to get on the same page. Many companies have publicly chosen which side of the divide they stand on by doing various things. For example, Chick fil A has openly been opposed to LGBT rights and in contrast, big companies like Apple and Coca-Cola often run television commercials celebrating diversity. Not sure if it was another “one-up” attempt on Coca-Cola, or a genuine desire for Pepsi to show the world which side of the divide they stand on, but for whatever their reasons may or may not be, Pepsi decided they, too, would make a commercial to celebrate diversity, but Pepsi took it a step further and decided to shed light on the harsh reality of what it sometimes costs for diversity to be celebrated (I think that was their “one up”). In the commercial, we see a protest taking place, fast forward a couple seconds and we see Kendall Jenner walking through the protest with a Pepsi in her hand. As she sashays through the crowd, Kendall finally makes her way to a line of police officers that are there to control or breakup the protest, where she approaches an officer in regular police uniform, hands him the Pepsi, and voila! The protest is over! Not only is the protest over, but a lady donning a Hijab catches this magical moment on camera, and takes a picture of Kendall Jenner handing the officer his well deserved, Pepsi. 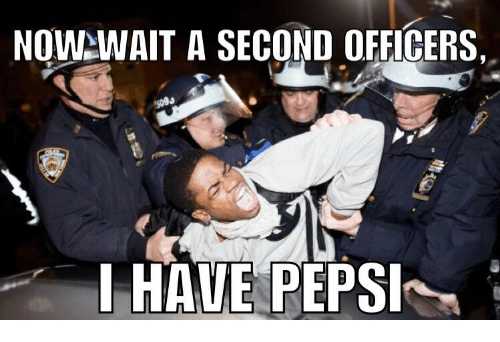 I get it, not everyone may understand why this is such a big deal. After all, Pepsi did make a commercial that projects a global message of unity, peace, and understanding. I am not saying it was intentional, but what Pepsi also did was essentially minimize a reality that America as a whole has been minimizing since 1865. To be fair, for as far back as any of us can remember racial discrimination, and discrimination against minorities as a whole, has always been a topic of conversation, and always intertwined into those conversations are the accounts of the horrendous treatments those discriminated against suffered at the hands of their oppressors. It’s never an easy discussion to have, whether it be with people from your own background and beliefs or with someone who shares no common belief with you at all, somewhere the conversation gets ugly and it often gets awkward, depending on who you’re talking to. Even as uncomfortable as these conversations may be, somehow it is something we STILL have to talk about and raise awareness for in 2017, and although, slavery ended in 1865, methods of control used in slavery have been passed down through to present day. Handcuffs? Chain gangs? Men patrolling people with guns? Sound familiar? Old habits die hard . . . I guess.

Too bad Dred Scott didn’t have a Pepsi in 1857 when the US Supreme Court decided Dred Scott v. Sanford, maybe he would not have been enslaved, too bad Rosa Parks didn’t have a Pepsi the day she sat down in the front of the bus in 1955, maybe she wouldn’t have been arrested, too bad Rodney King didn’t have a Pepsi 1991, maybe he wouldn’t have been beaten by police, and I can’t even begin to count how many Pepsis might have saved the countless minorities who have died at the hands of police, maybe they would still be alive. If reading any of the above sounded absurd, imagine how it looked to view a commercial that suggested a Pepsi could make an army of police back down from a crowd of protesters. I don’t know what was worse a Pepsi ending a protest or a Pepsi ending a protest carried by Kendall Jenner. You had to be left either thinking, “So that’s all it takes, huh? Give a cop a Pepsi and problem solved?” or “Of course the cops aren’t being combative towards her, she’s a white lady named Kendall Jenner . . . with a Pepsi!” And let’s not even talk about what the police may or may not have done to the random lady in the hijab taken pictures, watching the scene unfold. It is too much of a harsh reality for many minorities, that relationships and interactions with the police or anyone in a position of power, for that matter, is not as simple, nor as pleasant as Kendall Jenner’s interaction with the police in her Pepsi commercial.

I don’t fault Pepsi for their attempt at taking a stance on an issue America has been “working on” for nearly 200 years. It was a noble act, not well thought out, but noble nonetheless, and after all that time one would think the problem would be solved. Unfortunately, we haven’t solved our nation’s biggest problem, we have yet to successfully embrace the true definition of one of the principles our nation is built on, “that all [wo]men are created equal.” The disparate treatment of minorities in America, is the iniquitous backbone of our nations history, and all the Pepsi in the America couldn’t fix that.

What Africa must learn from the recent Kenyan Presidential Election…

2017 has been a roller coaster year for Kenya politically, as with any election year in the country, Kenyans were excited and cautious both in…

Musical Politics | The Rise of Political Activism from Musicians and Creatives

Death threats, protests and ostracism. These are the effects musicians faced if they criticized the political climate in the early 2000’s. If you weren’t a…