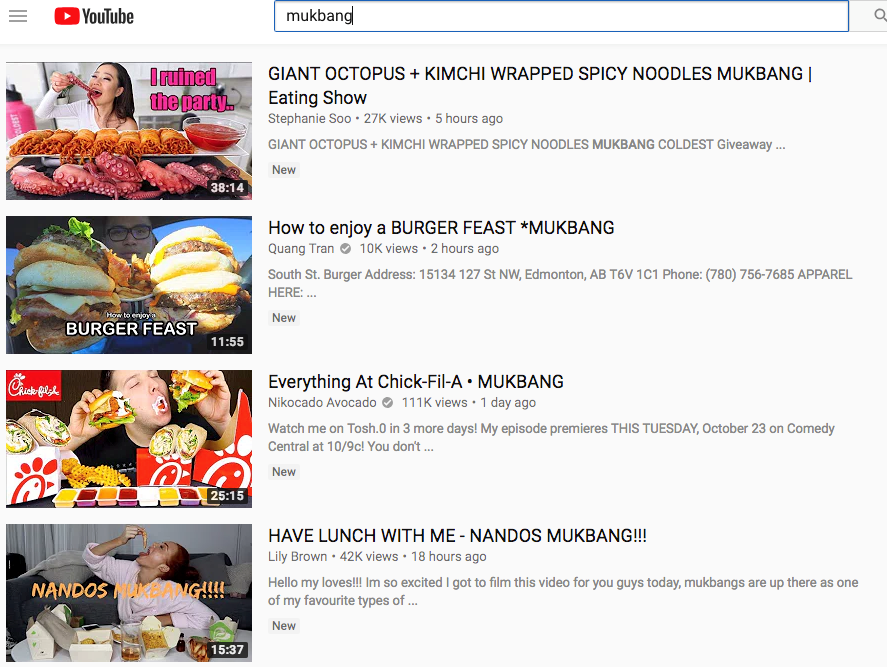 I find myself watching YouTube more than Netflix or Hulu. Whether it be beauty videos, movie reviews, live streams of video games, or the random ‘wtf how did I end up on this side of YouTube’ video, YouTube is my most visited site.

In the past couple of months, my recommendations have been flooded with mukbangs after I stumbled across a few in intrigue. If you aren’t familiar with what a mukbang is, it’s a type of video where people eat food on camera (typically large amounts) while interacting with their audience.

Mukbangs became popular in South Korea around 2010, but Americans have started to cash in on the trend. YouTubers like Stephanie Soo, Veronica Wang, Nikocado Avocado and the controversial Trisha Paytas have hundreds of thousands of subscribers tuning in to watch them eat–and they’re making mad money off of it!

There are many appeals to mukbangs. Some feel that they’re sitting down and eating with a friend, while others are living vicariously through the person eating mass amounts of food.

I was never able to see the appeal of mukbangs until I watched one late at night and found my mouth watering at the sight of the food on my screen. I found this odd comfort in watching someone else eat food I knew I shouldn’t be eating, since a lot of the food eaten in mukbangs is quite unhealthy.

As I kept finding new mukbangers to subscribe to, I noticed “massive cheat-day” and “10k calorie challenge” videos start to pop up in my recommendations, many of them coming from YouTubers who were into fitness. 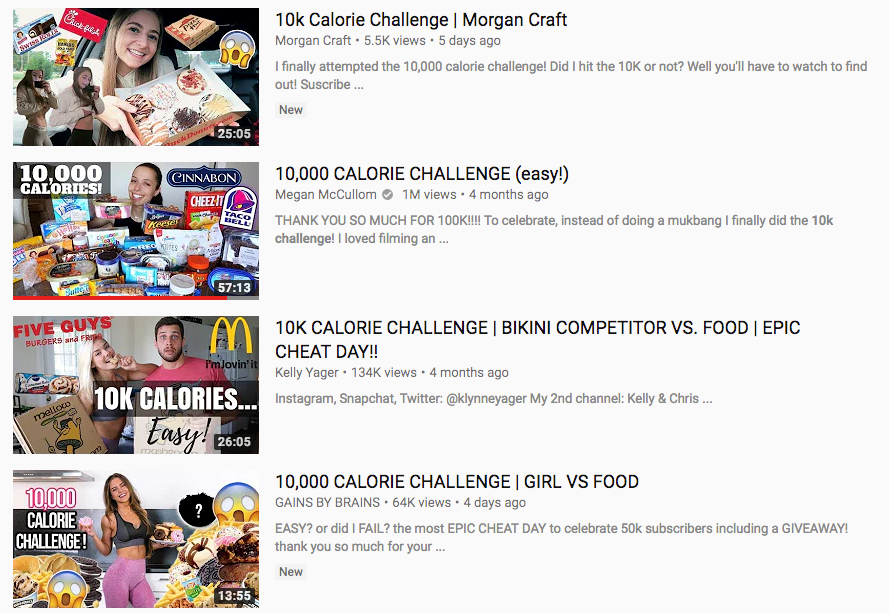 My intrigue caught the better of me and I browsed through dozens of videos of people shoving food down their gullet to try and reach 10, 15, even 20k calories in a day. Most people eat 1-3k calories a day—how could people stomach more than that?

I was disgusted and fascinated at the same time, especially by the YouTubers who were in shape. How were they maintaining their figure while packing all this food away? I noticed many of these YouTubers were heavily restricting their calories on their days off or were working out for two plus hours in the gym several times a week. I also noticed that a few of these mukbang/cheat-day YouTubers were recovering binge eaters or had some eating disorder before. Some said doing mukbangs helped them get through their disorder. That reasoning can be valid and I’ve never experienced an eating disorder so it’s not up to me to judge.

But I started to use that logic myself after I reached a breaking point in hating the way my body looked after gaining nearly 60 pounds since graduating high school. It was totally okay if I ate two double quarter pounders and 20 chicken-nuggets with a milkshake from McDonalds—so long as I overworked myself in the gym, right?

I was deluding myself and I knew it. One cheat day won’t hurt you, but several will, and you can’t maintain your figure if you don’t work out and eat fairly well.

As I looked through comments on these videos, many coming from teens, I couldn’t help but notice how many thought this type of eating on a regular basis was healthy. I also saw comments from girls saying how these videos were triggering or how they wished they could eat two dozen donuts in one sitting and still look as hot as someone like cheat-day/fitness YouTuber Stephanie Buttermore. Society already puts a lot of pressure on girls to be airbrushed models and even in the era of body positivity, it’s still hard to love your body. 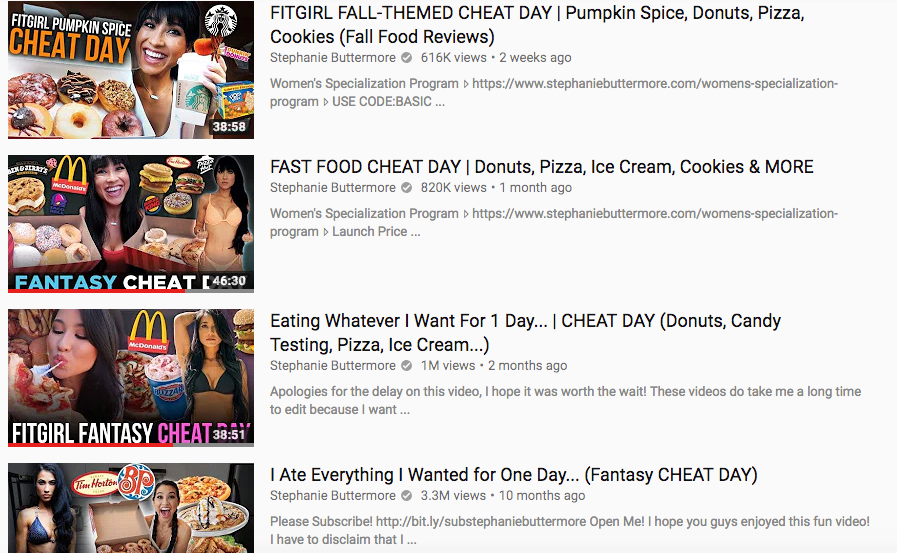 These young girls watching these videos are incredibly impressionable, and while it’s not the responsibility of the YouTuber themselves to be a role model, would it hurt for them to admit that what they’re doing isn’t always healthy and people shouldn’t follow them? Mukbangs and cheat-days don’t have to be inherently unhealthy, but if you just type in mukbang on YouTube and look at what immediately pops up, it’s nothing but crap!

It’s all about moderation, but mukbangs didn’t originate in moderation. If people want to do mukbangs or cheat-day videos, that’s fine, they’re enjoyable. However, we shouldn’t idolize gluttony or do eating competitions that can be unsafe not only physically, but emotionally by creating unhealthy relationships with food.

Mukbangers should cut down on how much they eat calorie wise and viewers, especially younger, should understand that you can eat what you want in moderation and with control. Have that burger or burrito if you want to—but don’t gorge yourself and then purge it by working out later.

The 5 things you absolutely need to STOP doing, for an incredible 2017

Make these New Year’s  “DONT’S” among your top priorities in 2017. Stop feeling obligated to say “YES” all the time. It’s alright to say “NO!” Sometimes…

Balling out of control?

Peak basketball season hasn’t simply belonged to the likes of Curry, James, Kyrie and Durant. It has also been about “The Ball”, Lavar Ball. Lavar…

How healthy is too healthy?

Her day is consumed by caloric intake. She obsesses about the content of her meals and where it comes from. She spends 30 hours per…