LAS VEGAS — Hillary Clinton won the last presidential debate this past Wednesday with 83% to 17% margin according to an M-lifestyle poll of debate watchers.

Clinton plans on making college debt-free for those families who make less $125,000 a year. Trump never said anything about what his plans were for making college affordable.

“Donald Trump has mentioned cutting funds from the Department of Education. I think any candidate that’s willing to defund the minds of future generations is deplorable, and completely unfit for the Oval Office,” said Rachel Rossi, an early childhood education and sociology double major at Virginia Commonwealth University.  “As a future educator, I understand the importance of a strong foundation in learning.”

In the beginning of the debate, Trump was calm and did not interrupt. It all escalated midway through and the attacks from both candidates were rampant. 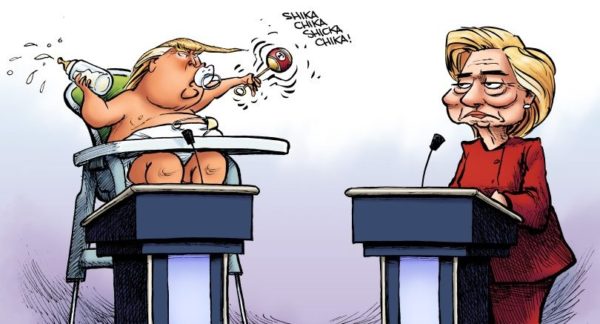 Both candidates were prepared. Trumpwas behind Hillary in the Gallup poll and currently is still behind Clinton. During the debate, Trump was going to keep us in suspense as to whether or not he will accept the election results. This will haunt Trump because the presidential election is not a game. The election is not a reality show.

Even after the last debate, Trump says he will only accept the results if he wins.

One high point of Trump’s performance was when he was talking about how Hillary does have something over him, which is experience. However the experience he also points out is not something to brag about.

Both, however, did not shake hands. This, in large part has to do with Trump’s personal attacks interjecting Clinton and saying she is a “very nasty woman.” After the beginning of the debate Trump started interrupting his opponent.

Many do not believe Trump actually respects women. According to a poll done by M-Lifestyle, 100% agree that Trump’s statement “Nobody has more respect for women than I do” does not represent Trump.

There have been talks by political commentators after the last debate on whether or not there was going to even be another debate. Even after this last debate, many Americans have not changed their minds with regard to whom they are voting for.

According to M-Lifestyle as well as many other news outlets polls show Clinton has won the final debate.

The fact that Trump doesn’t understand the basic economics, the fact that he doesn’t realize that the United States’ GDP is growing at a healthy rate is annoying,” said Pedro Silva, an economics major at Reed College. “He just gets to spew this nonsense and the average person doesn’t know any better than to believe him.”

It is the final stretch. This last debate between candidates Hillary Clinton (D) and Donald Trump (R) this past Wednesday Was a memorable one.

On Thursday, August 9, an all female team of Nigerian teenagers won the 2018 Technovation, a program that invites girls to identify a problem in…

A string of sexual assault victims of celebrities have recently come forward. From actors, to directors to comedians. It seems there is an awakening occurring.…