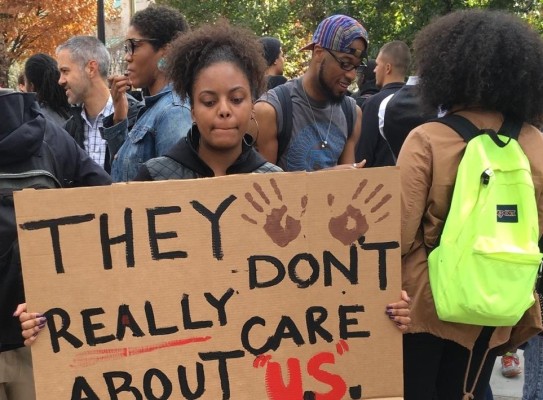 One user posted that they would “shoot every black person I see.” Another said: “Some of you are alright. Don’t go to campus tomorrow,” according to the Associated Press. The threats provoked alarm among students.

The yak left many African American students at University of Missouri feeling scared, since it followed a slew of racist yik yaks. Many sent emails to their teachers explaining their fears and posted on social media about not going to class. Some professors were supportive in their response, and stood by the students in their time of need.

Yik yak’s creator has also sent out a response to the threatening situation. It detailed Yik Yak’s disapproval of the threats sent through the app and condemned them.

Following the arrests earlier yesterday, the university issued a response; 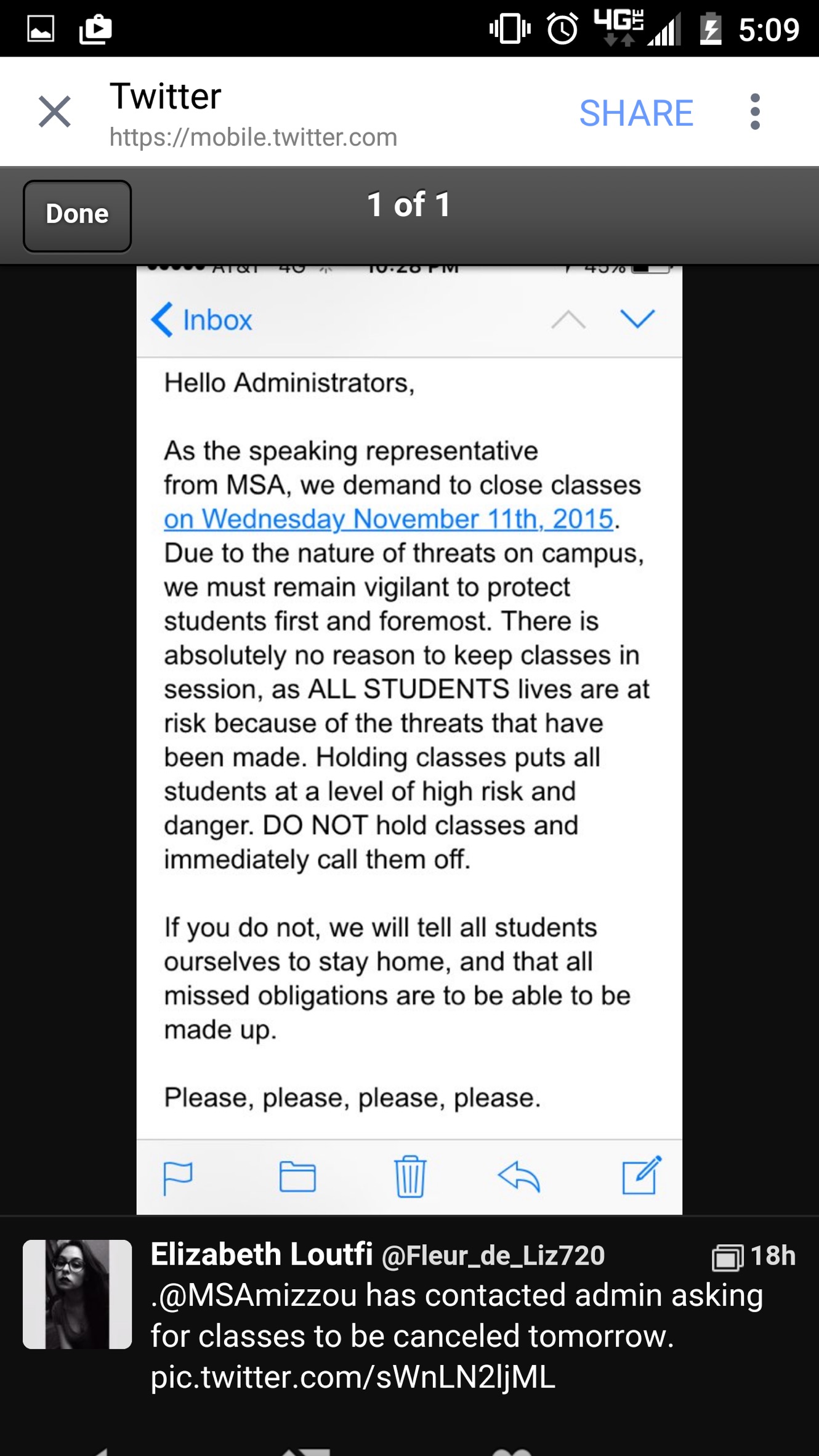 But this only served to intensify the criticism of the university’s administration. Activists said students were not sufficiently notified of the threats, and questioned whether the incidents were not taken seriously because of the race of students threatened. Classes were not canceled on Wednesday despite a request from the student government, the Missouri Students Association, to cancel the school day in light of the threats, the AP reported. 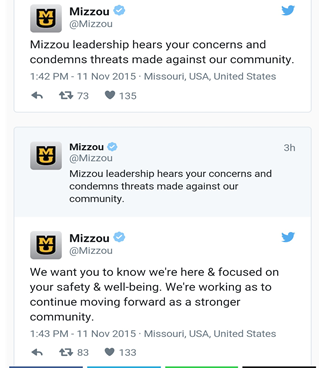 Black students at the University of Missouri have been facing racial incidents for months. On October 10, a group of black protesters blocked the university’s president’s car at the homecoming game, demanding he resign for conditions his African American students were in. The African American students at the university have faced racial slurs and swastikas drawn in feces on their dormitory bathroom back on October 10, this is when the protests began. Football team members stopped playing, and students picketed until their concerns were heard. After the yik yak incident, which also included racist yik yaks, it became nationally known what was happening at University of Missouri and other colleges responded in solidarity with the students.

Today at Virginia Commonwealth University, there was a protest called ‘Stand with Mizzou’, standing with those students threatened with danger, because of the color of their skin. 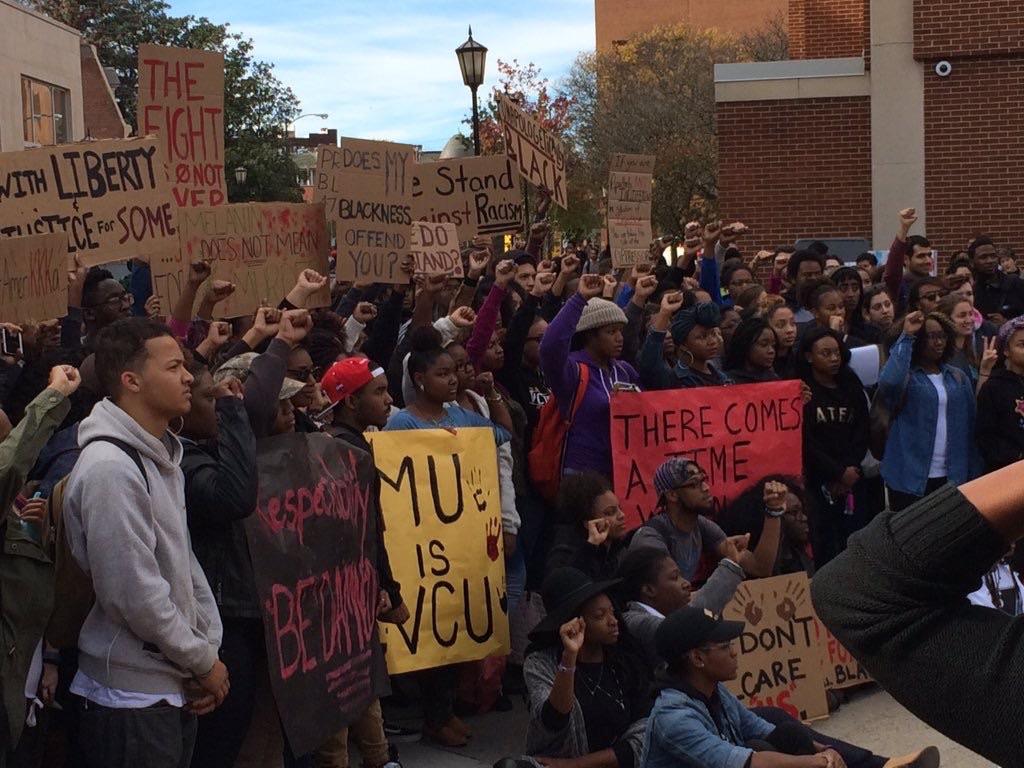 Rioni Boyd, a student at VCU, helped organize the event. When asked how she perceived the events at the University of Missouri, Boyd said; “A lot of things are happening at Mizzou- black students rallying, football players petitioning, and the president, Tim Wolfe stepping down all are the sum of multiple cases of social injustice on the University of Missouri’s campus. These include; racial slurs being yelled at black students, the feces drawn swastika in the residence hall bathroom and so on, but the president not addressing the issues nor committing to a plan to address the demands of the protestors, was the greatest concern to the students. It is very disheartening and sad that even after many years, and how far we’ve come as a society that we still face problems that are solely based off of the color of our skin.”

Boyd said the rally gave them the chance to use their power or speak their voices.

“Students spoke their truths on the issues that the nation is faced with today and has been faced with for years; they spoke on the issues at Mizzou, the issues we face on campus, and their personal experiences with racism.” “We all were passionate about all of these topics and demanded answers from our very own faculty and campus police chief, himself. We stood there with signs that symbolized our emotions. All together it was a peaceful protest for a wonderful cause, which ended in prayer. Hopefully, it was an eye opener to everyone- especially those in disbelief that racism does indeed occur TODAY. I attended the rally with my brothers and sisters to be heard…We can’t be silent and expect results, we will continue to fight until we make a roar… This is only the beginning!”

Students are standing together to have their voices heard to make a change. Let your voice be head, stand with Mizzou. 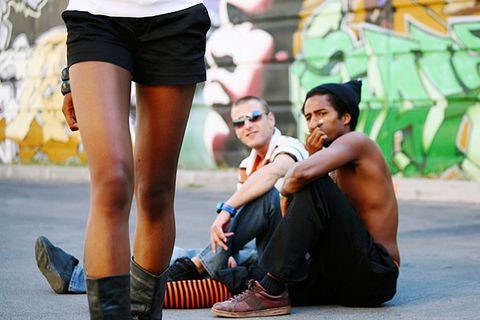 After watching the first part of the “Surviving R Kelly” story on Lifetime there are a lot of thoughts flowing through my head, but the… 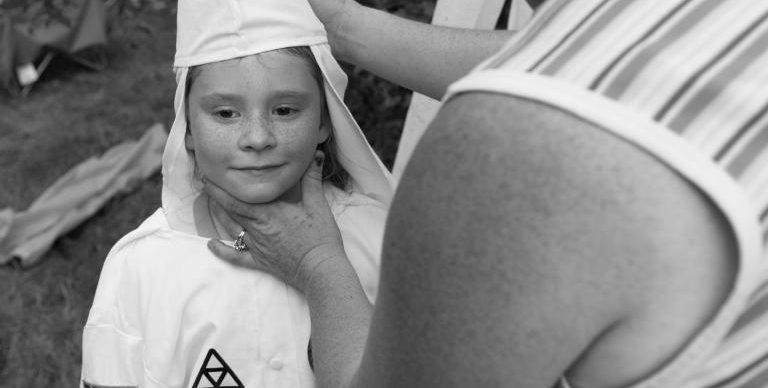 “Masks Off” | This is the state of racism in America

The events that occurred in Charlottesville, Virginia this month have not only sparked debates around the nation, but have reminded us how far America still…