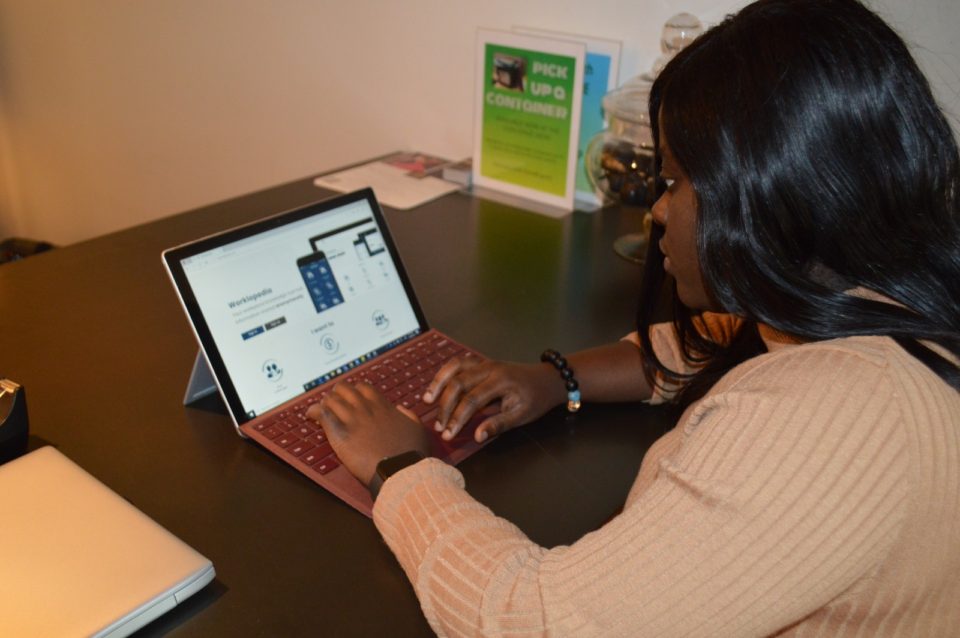 Who would have thought that a tweet might land someone their dream job? Ama Kusi happened to be on Twitter on a cold winter night in February of 2018 when she saw a Microsoft Executive tweeting about the company’s initiatives to celebrate Black History Month. That’s when Ama had the brave idea to do something unconventional. She responded to the Executive tweet, telling him that for Black History Month, he should help her get on board at Microsoft.  He responded by asking her to submit her resume via his direct messages  and as of June 2018 she started a new position at Microsoft as a Product Marketing Manager.

What Ama thought was her dream job was also the foundation that gave birth to her own business: Worklopedia. Ama has had many managers while employed at several Fortune 500 companies, but her new manager at Microsoft was different.  Inspired by her current manager, Ama developed the first ever micro-anonymous tool to help workers rate and assess bosses, their teams and compensation.

One day she had a brainstorming meeting in a conference room with her manager and two other male teammates. Ama got up to take notes on a white board, as her manager started to open the session. Her manager got up immediately and said, “I won’t let the only woman in the room take notes.” Among other things about him, this really inspired Ama and she went home that night to call a friend to tell her what had happened.

“I asked my friend, “How come there isn’t a rate-my-professor site but for managers? I want others to know how great of manager he truly is”. Her friend rebutted that that was the purpose of sites like Glassdoor and LinkedIn, but Ama had a different platform in mind. Platforms like LinkedIn, in her view, just highlighted the positive qualities among employees and managers, but nobody mentioned the not so great qualities. This is when the idea that eventually became Worklopedia was conceived.

After the phone call to her friend, she pondered for several months about the idea.  Ama never thought about being an entrepreneur and she certainly did not have plans outside of Microsoft.

“I was comfortable at Microsoft and it felt like a dream job, but the idea kept bugging me. I have never started a company before, so this was a huge risk to me. Then I came across a quote one day that said, ‘The most successful people are the ones who take risks’,” Ama says.

It would not be until April of 2019 that she decided to pull the trigger. In the month prior, a notorious internal Microsoft email chain leaked to the public, sharing stories of sexual harassment and discrimination amongst a large number of female employees. This disturbed Ama and ultimately fueled her passion even more to sit down to map out the idea for Worklopedia.

Ama had no coding experience to create an app for her website, so she had to map every detail of how she wanted it to look from beginning to end. The time and cultural difference provided an obstacle to what she was trying to accomplish, with her development team in her home country of Ghana and her being in the US.

“When my team initially made the icons for my website, they were all images of men and one day I had to call them and say ‘Oh no! We are going to be using icons of both men and women’,” she laughed. “At first they didn’t understand the need for both; they were missing the cultural context of why it was important to have representation of both here in America”.

After three long months, Worklopedia was officially launched in October of this year. The organization’s mission is to make individuals successful in their careers and keep companies transparent and accountable. It serves to disrupt the social stigmas upheld in the workplace, such as employees not sharing their salaries, and others. It is a vehicle to set people up for success. What started as platform to review just your managers became a wider platform for discussing teams, compensation, salary negotiation and much more.

Ama also wants to encourage emerging entrepreneurs to be risk-takers, just as she is. If we identify the need for a certain service or technology, she wants us to fill the gaps by creating solutions, and not just sitting on the idea.

“I find it common that once we get comfortable in certain places we stay there. Almost doing something is not enough. Be brave and find that God factor, if you believe in one. Definitely have a strong support system in place that will push you further when you feel like giving up” she says.

Kusi remarks that one of her greatest rewards is seeing the platform empower employees, especially women who often have more disadvantages in the workplace. Serving others and helping them define their careers is what gets her out of bed most mornings.

Looking towards the future, Ama wants Worklopedia to be the center of the conversation when it comes to people careers. She hopes to hear testimonies from users letting her know how helpful it is and how it has been a vehicle to advance their career.

In Search of Purpose | DREW LICHTENBERGER

It so happens that when you have discussions with certain people, within a week- all that was discussed is forgotten. With some others, although the…

Extra, Extra Read All About It | Journalism and its Failures

“I don’t think a union is right for BuzzFeed,” CEO of the company Jonah Peretti has claimed. The unfortunate truth is that many people in…